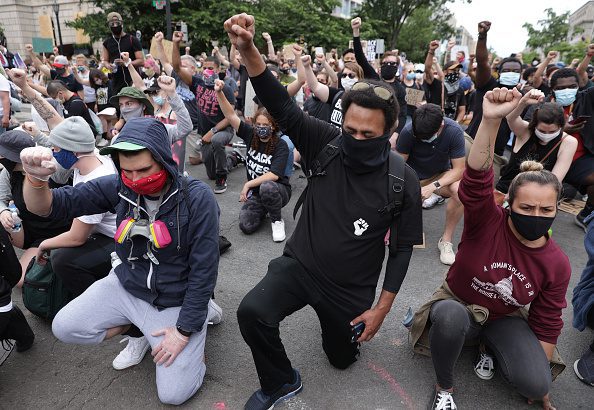 The killing by police of George Floyd in Minneapolis last month has spawned a national protest movement that’s brought tens of thousands of Americans into the streets. It’s prompted major corporations, high-profile performers and athletes to take public stances on issues of race and justice.

It sounds counter-intuitive to those used to immediately pivoting to high-profile speeches or public policy plans. But some high-profile responses, including #BlackOutTuesday  during which many used the #BlackLivesMatter tag and crowded out details on protests taking place across the country, have been criticized as unhelpful or worse — disingenuous  and hypocritical.

So what’s the first course of action for candidates? Lean into substance rather than slogans and make sure you have a thorough conversation with your campaign team before issuing statements at every new development or jumping on Facebook Live.

“I don’t think every candidate is prepared to speak in this moment, and it is up to an individual candidate and their individual team to have a thoughtful conversation about if their voice is useful and appropriate,” said Francesca Dulce Larson, a partner at Democratic firm Mosaic Strategies.

She said it’s critical for candidates to sound out their ideas with staff before going public.

“This is a great time for mock interviews and prepared statements for some candidates to get the feel for what your voice needs to be,” she said. “If you’re a campaign staffer, part of your job is to figure if your candidate can show up in that way.”

Rather than giving a speech via Facebook Live, Dulce Larson recommended “turn[ing] over your Facebook page to a series of community leaders to have a conversation.”

“Now is the time to be the candidate you always wanted to be because it may actually win you an election,” she said. “If you’re running for office because you want to make a difference, then your campaign should be doing everything that is going to make the most difference right now.

“Applying a strategy that helps you win may be different than a strategy that makes the most difference, and you’ve got to be real honest with yourself because trying to do both is how folks get in trouble.”

Meanwhile, campaigns and groups that adapted their tactics and voter outreach to cope with the pandemic could be best positioned to emerge stronger from this period of civil unrest.

“In terms of tactics, the campaigns and the organizations that were able to adapt quickly to the situation with COVID, and really learned the lesson that we need to employ some rapid response and think holistically about our digital program, the people who are able to make all of those components come together, are going to see the best response from their followers,” said Cheryl Hori, a Democratic digital consultant.

“It’s listening to your supporters and figuring out what it is that they need. This is a similar tactic or strategy for COVID. Every neighborhood has different needs and different levels of response to the situation. Be as genuine and authentic as you can be.”

As protests spread in the wake of Floyd’s killing, leading to clashes with police in many cities across the country, some campaigns had already scheduled email, texts, and social media ads making fundraising appeals that were distributed without referencing the unfolding events. That shows a problematic disconnect between the candidate or group and their supporters, Hori noted.

“If your team is updating your Facebook with things that are relevant to the protests and what’s happening on the street, but your paid media arm isn’t in the loop, that’s going to send a conflicting message to your supporters,” she said. “It definitely comes off as tone-deaf if you have campaign ads that are running that don’t even acknowledge the state of our country.”

Most campaigns have since adjusted, notably on fundraising. To wit, the Biden campaign’s email on June 2 included the disclaimer: “This is a difficult time for our country and we understand that it may be an especially difficult time for many of you personally. If you’d like to pause fundraising emails for the next two weeks, click here.”

The bottom line for Hori: if the candidate or group hasn’t spoken up about racial justice or equality in the past, now is not the time to start. “It can definitely come off as opportunist.”

Brian Ross Adams, a Democratic digital consultant based in Los Angeles, is another practitioner advising clients to do more listening than talking.

“I have advised my clients to give current and relevant information through organic messaging, stay abreast of the news and be very mindful of the passions of the moment and their historical underpinnings,” he said. “In short: listen, be aware of the effects of your words, and no unforced errors.”

“My advice to clients is to be conscious of your constituency and stick to your brand,” said Majority Strategies’ Chris Faulkner. “There will be, sadly, a lot of inauthentic and tone deaf comments at this time. Twitter feeds are not polls on public opinion and waiting to comment is better than rushing just to say something.”

Once the marches thin out, candidates and groups should be prepared to adopt a conciliatory tone.

“Our elected officials have a responsibility to reassure their constituents that they will do everything they can to bring us together, protect us, and defend our First Amendment right to peacefully protest any injustice,” said GOP digital consultant Parks Bennett.

“Personally, I think that after all this time in quarantine we are starving for more togetherness in a safe environment.”